I write romance, I read romance, and I work at a bookstore where I sell romance. One would think I’ve got the bases covered, that I’d be familiar with all the popular romance authors. Our independent bookstore at the crossroads between Sunset Beach and Ocean Isle hosts some pretty big bestsellers including: Mary Alice Monroe, Dorothea Benton Frank, Diane Chamberlin, Patti Henry Callahan, and Kim Boykin. Our shelves are full of many lesser known authors and we support and stock books for many local authors as well. I read the lists. I belong to Romance Writers of America. I follow the reviews. Romance is my game. Or so I thought.

I began reading romance when I was twelve, combing the racks at the Post Exchange in Frankfort, Germany for the latest Emily Loring or Cherry Ames books. I have a strong connection to the romance genre. When I hold a new romance in my hand, I have to fight the feeling that if I put it down it will flame and go to ashes and I will never get to savor the story within. So I read voraciously. I cannot imagine going to the beach, pool, doctor’s office, or grocery store without a book tucked into my purse, tote, or recycle bag. I worry that in a hostage situation, I won’t have a book to read if I’m locked in a bank for days on end. Irrational, I know. When I finish a book, despite having a towering TBR (to be read) pile, I scour the Internet, the store bookshelves, and the romance blogs to secure my next fix. I thought I was familiar with at least every romance author—if not every book. I was wrong. And for many years I’ve missed a very good author.

Last week a customer came into the shop and asked about books by Roxanne St. Claire. I’d shelved a few of her books over the years but couldn’t remember reading or selling one. They had escaped my notice, flew under the radar. I could picture the covers in a vague sense, and I remembered that the simplistic quality hadn’t appealed. Even though we all deny it . . . we are all influenced by book covers. I shouldn’t have been, Roxanne is a one-woman show, as I am myself, and personally, I would bungee jump for a professionally done cover. No, no, I would not . . . zip line maybe. Any way, back to the customer who came into the bookstore. 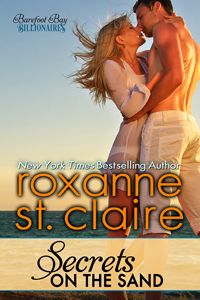 Horrors . . . we had no Roxanne St. Claire books on the shelves. In all fairness, Roxanne specializes in Florida-based books while we are all about the Carolinas. I immediately ordered several titles, and reserved one for myself. Secrets on the Sand arrived just before the Easter break. On Good Friday I read the first four chapters. Yowza. It was like getting a Cadbury egg in your Easter basket. Delicious.

Zeke, known in high school as Ezekiel the Geekiel, is now mega successful. Okay, you guessed it, as in the “b” word. Due to inflation, we’ll probably be reading about trillionaires in the next decade, but for now, billionaire Adonises are the rage. Amanda, formerly known as Mandy the Magnificent, was the former prom queen and shapely cheerleader. Zeke had not been in her circle, although he worshipped her from afar and let’s just say, she was his “dream girl.” He ends up at an ultra posh hotel where she works as the maid who comes to clean his villa. The dynamics have changed. He’s now rich, powerful and handsome, e’yet she comes off as not interested. Her wealthy ex-husband broke her heart when he dumped her, and the pre-nup had her going from four hundred dollar beach cover-ups to dollar store tank tops over night. She’s not doing that that again. She’s not happy that Zeke remembers her as the only bright light during his adolescence and is coming on to her in a major way.

When a compromising situation gets her fired, he goes to see her. Here’s the swoon-worthy scene that’s made me a BFF (best fan forever):

She stared at him, waiting as he walked up to her and got down on one knee so they were face to face.

“Once when we were freshmen, some kid mowed me down in the hall and knocked all my books and my sixteen different calculators and protractors to the floor. You stopped and got down, like this, and helped me pick up every single thing. And when that kid laughed at you, do you know what you said?”

Her green eyes still swam in tears as she shook her head.

“You stood up and flattened him with a look and said, “Get to class because you obviously have none.”

She started to smile. “I could be a real—”

He looked down and took the laces of the other shoe, slowly tying them for her. When he’d knotted them, he looked into her eyes again. “You told me a few minutes ago that I was relentless.”

“Wait until you see the power of that.”

He heard her suck in a quiet breath. That was good. He wanted to take her breath away. And he would. She just didn’t know that yet.

Pretty yummy, huh? So I’m a fan for life. And you know how things happen in threes? The next day, I opened my Romance Writer’s Report and there’s a tutorial on revisions by . . . you guessed it, Roxanne St. Claire. I will read them over and over in hopes I can turn out a book as well written. Then I literally tripped over a book that fell off the paperback rack at the grocery store. You guessed it, Barefoot in White, by Roxanne St. Claire. Soon, my TBR pile is going to have all her titles.